I've been quite content with my Mytek Brooklyn+ Digital-to-Analogue Converter. But I had read so many posts on audiophile websites praising a new DAC by a little-known Chinese company, Musetech (formerly LKS Audio), that I thought I might give it a try. Users referred to it as an "end-game" DAC, i.e., a piece of equipment they never expected to be surpassed in quality. Some even said that they had sold off $15K DACs in favor of Musetech's $3.3K MH-DA005. I'm always a bit suspicious of such glowing reviews, especially in the absence of reviews from well-respected audio journalists. In this case, however, I read so much enthusiasm, from several different quarters, that I decided it was worth the risk. 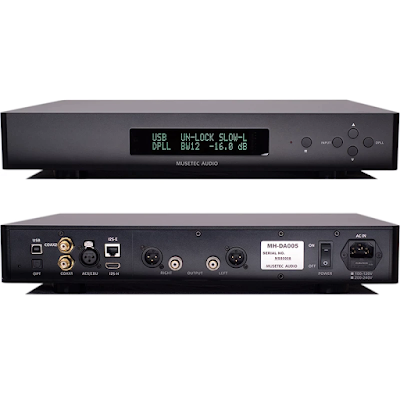 Deciding to purchase the Musetech 005 turned out to be a lot easier than actually buying one. Musetech has no official presence in the US, and the few dealers who carry Musetech-LKS products have long been out of stock. I didn't want to order it from China, so I've been biding my time. Last week, a dealer in Northern Indiana, Midwest Audio, published an ad for a new one at usaudiomart.com, a highly reputable marketplace I've used in the past to buy and sell used equipment. The price was right, so I ordered the DAC.

To be honest, I didn't expect vast improvements over my Mytek Brooklyn +, which is a very, very good DAC, which was only a few hundred dollars less expensive than the Musitech. But, as soon as I plugged the Musetech into my system, even before it had a chance to warm up, I could hear big, positive improvements. Specifically, it is more detailed than the Mytek, but also a bit less bright and forward. The Mustech's soundstage is wider and deeper, but without any hint of the kind of distortion one sometimes hears in tube-based and R-2R-ladder DACs. Mustech uses two ESS Sabre 938Pro chips in its system, which one would expect to be better than the Brooklyn+'s pair of ESS Sabre 928 chips. But that's not the whole story.

Many audiophiles dislike (or at least dis-prefer) Delta-Sigma DACs, like the Mytek and the Musetech, which use are chip-based DACs. They prefer R-2R-ladder DACs, which use a bank of weighted resistors, rather than chips to convert the digital signal to analogue. They claim that R-2R DACs sound more "natural" and "alive" than Sigma-Delta DACs. Those who prefer Delta-Sigma DACs tend to claim that they tend to have less distortion and provide more musical detail than R2R DACs. In truth, both sets of claims are misleading because, while the chips/resistance ladders may be predominantly responsible for the sound reproduction, they are not the only parts in a DAC that affect sound reproduction. As one reviewer on Audio Asylum put it: "Power supplies and quality parts really matter." So does the actual design of the circuit. Unlike most DAC-makers, Musetech actually publishes details about the components they use. Presumably, they do this because they use all top-of-the-line clocks and capacitors.

So far, I have to concede that the Musetech MH-DA005 is everything that I have read about it. It has great presence and atmosphere. Musical instruments sound real and existence in nicely defined spaces. To use an overused cliche, the sound is "holographic," almost as if the musicians are in the room with you. There is no tinniness or hard edge to the sound; to the contrary, the overall tone is ever-so-slightly darker than absolute neutral (to my ears). I can easily imagine that, in a blind test, even veteran audiophiles would conclude that the design is R-2R, rather than chip-based. But it has none of the distortion or smearing that I have heard in less expensive and/or less well-designed ladder DACs (such as the Holo Spring, Level 2, which I found so disappointing, I returned it after a week). In all honesty, the Musetech MH-DA005 sounds to my ears like a best-of-both-worlds kind of DAC, combining the best qualities of chip-based and resistance ladder-based DACs.

I don't believe in the special ingredient called "magic dust," which reviewers sometimes allude to in raves about some new product that seems more than the sum of its parts. The Musetech is that, and then some. But the real magic is the design and implementation work done by the company's audio engineers. I can't say whether or not it is as good or better than other, more expensive DACs because I have not heard them (let alone heard them in my system). But now that I have heard the Musetech, I am a lot less skeptical of claims that it is a giant killer. Whether it is an "end-game" DAC remains to be seen, of course. Especially given the rapid pace of substantial technological improvements in digital-to-analogue conversion, no one knows how even the best of today's DACs will stack up against those built in 10-years' time. But for right now, and at least the next few years, it is a DAC to be reckoned with.

I just returned home from a one-day conference in Berlin organized by the Ostrom Workshop (OW) at Indiana University's European Gateway ...

Dan Cole's Dubious Memorabilia
I am the Robert H. McKinney Professor of Law (IU Maurer School of Law) and Professor of Public & Environmental Affairs at IU Bloomington, where I also serve on the Affiliated Faculty of the Vincent & Elinor Ostrom Workshop in Political Theory and Policy Analysis.